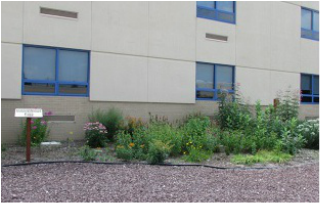 In the beginning - 2011
LOCATION:  300 Martin Street,  Bellwood, PA  16617
PNPS has donated funds, plants, and advice towards the development of this unique educational experience.

From the outside, there is nothing particularly remarkable about Bellwood-Antis Middle School.  It’s   a one-story, beige cinder block building situated on a quiet street in Bellwood.  But if you look a little closer, you just might notice something unusual – at the side of the building facing the main street sits a decorative wooden gate that once opened, leads to a pretty remarkable place:  the Bellwood-Antis Middle School Environmental Education Center (EEC).

The brainchild of Middle  School Principal Donald Wagner, the EEC was first  conceived in the summer of  2010. The existing space was unused and in it  Wagner saw an opportunity to  create something not only instructive but  beautiful.   Taking his idea to his teachers in the fall, Wagner found  a groundswell of support and began writing grants to fund the project.   One grant, from Natural Biodiversity in Johnstown, paid for the design of the classroom, while additional grants from Lowes, WREN,  Albemarle Chemical  Company, Northern Blair Kiwanis, Operation Our Town, DeGol Brothers, and the Pennsylvania  Native Plant Society funded the purchase of materials.

In spring of 2011,  construction began on the EEC and included pollinator and shade gardens, a vegetable garden, and a pond with a pump that runs on solar power.  A greenhouse, stage for instructional programs, and outdoor pizza oven completed the design.  PNPS, in addition to providing financial support, was instrumental in selecting native pollinator and shade species for the gardens. Under the direction of Board Member Sarah Chamberlain, the gardens were planted in the spring of 2012 with supplemental plantings in 2013.  Plants purchased  using PNPS funds or donated by members include common milkweed (Asclepias syriaca), swamp milkweed (Asclepias incarnata), beebalms (Monarda spp.), beardstongue (Penstemon  spp.), mountain mint (Pycnanthemum tenuifolium), wild blue indigo (Baptisia australis), and culver’s root (Veronicastrum virginica) for the pollinator garden and Jacob’s ladder (Polemonium reptans), twinleaf (Jeffersonia diphylla), bloodroot (Sanguinaria canadensis), Jack-in-the-pulpit (Arisaema tiphyllum), ginger (Asarum caudatum), and blue cohosh (Caulophyllum thalictroides ) for the shade garden.  Since its conception, the EEC has been a great success.  Over 100  students and several teachers have participated in its construction and maintenance.  The next step will be to add technological support through the development of QR codes that will be placed on interpretive signs throughout the EEC.  QR codes will allow students to embed videos, web sites, and other informative topics like native plants and pollinators, that visitors can view using Smartphones or other QR reading devices.   Although its footprint is small, the EEC has already had a big impact on the students and has the potential to influence the larger Bellwood community as well.

As of summer 2015, we have over 30 native plants and many happy pollinators!