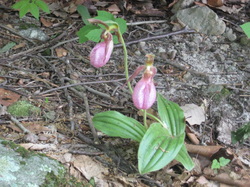 A look at the native orchids found in Pennsylvania in their habitats, along with scenery, and some other native flowers.

After the talk, you are invited to join us for the PNPS Board Meeting at 7 pm.

About Dr. Glicenstein: Leon Glicenstein Ph.D. began growing orchids in 1954, and became assistant to the curator of orchids at the Brooklyn Botanic Gardens, then Carl Withner, from 1957 to 1960. He has advanced degrees in Chemistry and Horticulture, with an emphasis on plant breeding, cytology, and cytogenetics. Working as a plant breeder for five years at Linda Vista S.A. in Costa Rica, he photographed, in the wild, approximately 80% of the then known orchid species of Costa Rica. He also found new species such as Telip...ogon glicensteinii, Macroclinium glicensteinii, Pterichis leo, Stenorrhynchos glicensteinii, and Lepanthes glicensteinii. He won the second American Orchid Society Dillon/Peterson Essay Contest using one of his Costa Rican experiences. He has photographed many of the orchids in the Northeastern United States, Florida, and all of the orchids in California, where he located some taxa not formerly known to exist there. As a respected lecturer, has given numerous conservation oriented programs both nationally and internationally, showing orchids growing in their native habitats. Leon has been an invited guest speaker at both the Vancouver and Miami World Orchid Conferences. He has published numerous articles in the American Orchid Society magazine [including a 10 part series on Jewel and Painted-leaf Orchids with a supplement] and some in the Orchid Digest.

Before coming to Hoosier Orchid Company he worked for an internationally known plant breeding company breeding crops such as Chrysanthemum, Carnation, Azalea and Roses.