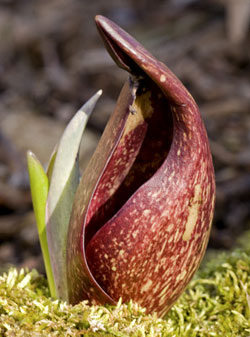 Height:  to 2' at maturity
Bloom Color: Purple
Bloom Time: March - April
Native Status: Native in the Northeast from Canada, south to TN and SC, east to MN and IA

The skunk cabbage is our earliest flowering plant, sometimes emerging through the snow and at a time of year when temperatures may still dip below freezing. It is a unique plant in that it is one of a small group of plants capable of generating heat through thermogenesis, a process that allows the plant to generate heat in excess of 59-95º melting ice and snow.  Though the plant produces a pungent odor, it is not poisonous.  The odor is used to attract the plants pollinators, namely flies, stoneflies, and early bees.

The large maroon spathe  forms a cup around the slender finger-like spadix, which is covered in small flowers. The leaves, which emerge after the flower puts on its appearance, are large, fleshy, and bright green.

The species name, foetidus, shares its root with the word “fetid,” which means "stinking." And if you don’t mind getting down on your hands and knees in the skunk cabbage’s soggy habitat to sniff this plant you’ll discover it has what most would consider an unpleasant odor. Even its common name implies a scent less than desirable, although some suggest that the odor reminds them of garlic. The odor and color of the spathe fits into the skunk cabbage’s reproductive strategy of attracting pollinating flies--that prefer rotting flesh or dung--which then carry pollen to the next plant.